The 44th Dakar Rally kicked off on January 1 in Saudi Arabia, where it is being played for the third time in history. Among the important Czech names that stood at the start, we must name the pilots of trucks Martin Macík and Aleš Loprais, motorcyclist Martin Michek, Josef Macháček with a buggy, and motorist Martin Prokop. Czech women are not left behind either, Olga Lounová also started! 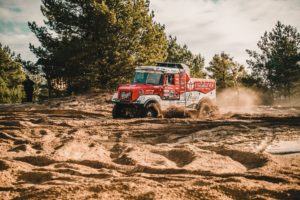 Our category is trucks

The Czechs have always dominated the category of trucks. This is accompanied by the recent sad news of the death of the legend Karel Loprais, the six-time winner of the Dakar Rally in the truck category. But how else could other riders pay tribute to him than repeat his successes? Martin Šoltys, Aleš Loprais (Karl's nephew) and Martin Macík are trying to follow them. He explained that it is necessary to drive "on the edge" for two weeks to win. And if you drive on the edge, there are two options. You will either arrive with a good location or not at all.

So far, it looks promising

The Dakar Rally is 8098 km, the track is divided into 12 stages, the rules are slightly adapted to the weather. For example, the second stage was to be marathon and without the help of mechanics or other team members. However, it rained a lot, the bivouac was flooded, so team help was allowed.

In the category of trucks, we are relatively successful after the second stage. Aleš Loprais finished in fifth place and described that they drove at 99% and they will probably have to add one percent as well. Martin Macík finished seventh in the second stage. The first three places belong to the Russians, who are already traditionally good in trucks.

Loprais drives a Praga truck at the Dakar Rally. You can still look at our range of tractors.